David Chesters farms at Millmoor Farm, a 260-acre beef and sheep enterprise in south Cheshire. For his calf rearing enterprise, he buys in dairy-bred beef calves and rears them from approximately three weeks to six months, before selling them on.

Because the calves come from several local dairy farms, there is always a risk of bringing disease onto the farm when new youngstock arrive. On top of this, the two sheds which calves go into on arrival are both old, steel framed buildings, which are sheltered but not necessarily enabling a steady flow of fresh air to circle through.

David was finding he was frequently needing to treat youngstock for pneumonia, especially during winter, with 5% to 8% of calves showing signs of the disease. With 500 calves passing through the sheds each year, the cost of treating pneumonia with antibiotics was adding up. 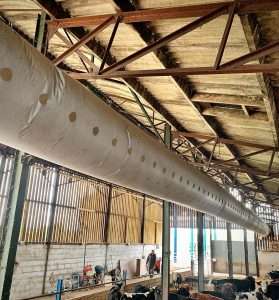 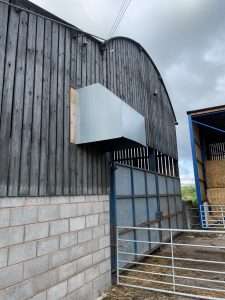 In spring 2021, David worked with his vet to introduce a multipronged approach to improving respiratory health. As they had already introduced a vaccination programme to take a proactive approach to prevent respiratory disease in youngstock, they turned their attention to improving ventilation in the two sheds with the poorest airflow, and David opted to install a VentTube Fresh system in each.

“I’d previously resisted the idea of installing positive pressure tubes, but having already opened the roof ridges and taken down doors to improve airflow, and still having pneumonia issues, we took the leap and put them in. The difference was remarkable, with the air being noticeably fresher and the calves more content.”

David shares that the number of calves which need to be treated for pneumonia has approximately halved since both the VentTube Fresh systems were installed and they started using an intranasal vaccine, having now dropped to between 2% and 3%. Mortality has also reduced, and many more are consistently achieving their 1.2kg daily liveweight gain target.

“We’re seeing far less ‘problem calves’ – the ones which get pneumonia, are treated, but never seem to thrive and put on weight at the same rate as the others in their age group. I put the success down to the combined approach; it’s tricky to pinpoint what’s down to the improved ventilation and what’s a result of vaccinating, but together they’ve been very effective.” 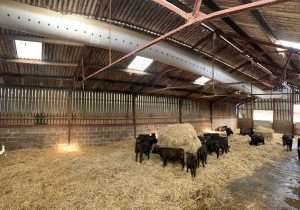 Since putting the VentTubes in, David has noticed a difference between the calves in the sheds with the tubes and those in a larger shed which has fans installed to control the airflow. In the shed with the fans, he has observed that the calves tend to bunch up underneath the fans, whereas with the VentTubes they are more evenly distributed throughout the space.

When asked if there’s any advice he would share with other farmers looking to improve ventilation in their calf rearing buildings, David recommends working with a professional to ensure you opt for the right dimensions for your building.

“What works in one shed may be totally wrong in another. My vet helped with measuring my buildings, considering the prevailing wind direction and working out the number, size and distribution of holes in the tube which would enable the optimum airflow for my calf housing.”