With the introduction of a flame retardant and dust resistant screen from Galebreaker, Walkers Snack Foods were able to begin food production in one part of a new facility while construction work still continues in the remainder.

Walkers opened their new plant in Skelmersdale, Lancashire, in March 2006 .The site, which had been unused for eighteen months, required a major refit. Construction consultants Summers-Inman have been retained by Walkers to manage the project which is expected to be completed in September 2006. With part of the construction work completed, and by introducing a barrier to prevent contamination from the building works, Walkers were able to begin production six months earlier than the due date for completion. To achieve this Summers-Inman had to put in place a system that would allow them to have an on going civil works project immediately adjacent to an open food production area, adhering to Walkers’ strict food manufacturing hygiene and safety rules. Completing the project on time also meant that construction work needed to be carried out while food manufacture was in process.The answer was to install a temporary partition wall that would have a full seal creating a dust free, clean and hygienic production zone. Because ovens a reused in the manufacturing process the partition has to satisfy class ‘0’ fire regulations as well as provide rapid access to fire door exits, which are located within the construction area of the building. Summers-Inman required an additional, but this time permanent, partition to shield the food manufacturing area from the pallet store and despatch area. Galebreaker, based in Gloucestershire, supplied the solution using flexible, flame retardant partitioning screens.

The installation of the 1500 sq.m temporary screen was made highly complicated by the large number of services traversing from the dirty dusty construction side into the manufacturing side. A large number of holes had to be cut to accommodate the pipes and wires, which all then needed to be closed with a sealed fit. Galebreaker designed bespoke aluminium and stainless steel frames and clamps for suspending and fixing the screens with all of the fixings for the partition located on the construction side to guard against any loose items entering the food process.The fabric used is coated on each side and, in accordance with British standard tests, achieves 113minutes fire protection with the highest possible pass rating for flammability. Galebreaker also built into the fabric several large doors for maintenance vehicle access.

The permanent screen has all the fire walling and screening properties of the temporary partition and effectively screens the manufacturing line from the pallet storage/despatch area. It has a 2.5m low level opening to give good working access to the pallet loading area and loading bays.

Summers-Inman are very pleased with the system. It is a proven method, is totally food safe stopping any possible contamination, and importantly allows them to get on with the job quickly and without having to limit their work to weekends and unsociable hours. Steve Turner, Summers-Inman Project Manager:“ The temporary partition works extremely well. It’s hygienic and gives greater environmental control so that we can more accurately regulate the ventilation and temperature. We chose Galebreaker for several reasons. They were good on price, quick to respond, and had the ability to install quickly. They were also happy to work weekends which was essential as we did not want to stop the manufacturing process”. Galebreaker did all the fixing and suspending of the screens, and were onsite for four weeks, during which time they did come up against a few problems. However, they completed the installation on time which was very important to Summers-Inman, Steve Turner: “It was crucial that Galebreaker completed the installation on time. They were scheduled to complete on the Sunday and the hygiene team were booked to start on the Monday. Any problems they encountered they solved. I have worked with Galebreaker before and, as ever, I am very happy with them and the product”. 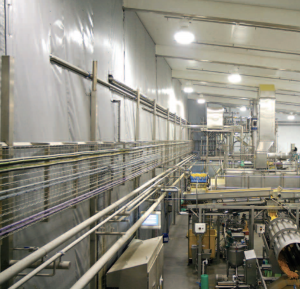 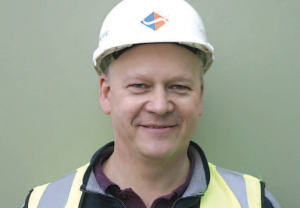